The new multi-charger stations will be installed in several cities throughout 2022 and 2023, including Santa Barbara, San Francisco, San Diego, and Beverly Hills, as well as within the boroughs of Manhattan and Brooklyn in New York City.

Charging an electric car isn’t as straightforward as refilling a gas tank. Recharging times can vary depending on the vehicle type and power source. Battery experts claim that charging times will eventually shrink to around 10 minutes, but not for years to come.

In the interim, Electrify America aims to make charging as comfortable and seamless as possible. The company’s new stations are organized around comfort, security, and amenities, with a nod toward the length of time it takes to recharge an EV. Electrify America says the goal is to create “a more inviting transition to an electric vehicle lifestyle from traditional gas station.”

“These new designs will help elevate the charging experience for our customers, building on the foundation of our ultra-fast and reliable coast-to-coast network,” Giovanni Palazzo, president and CEO of Electrify America, said in a statement. 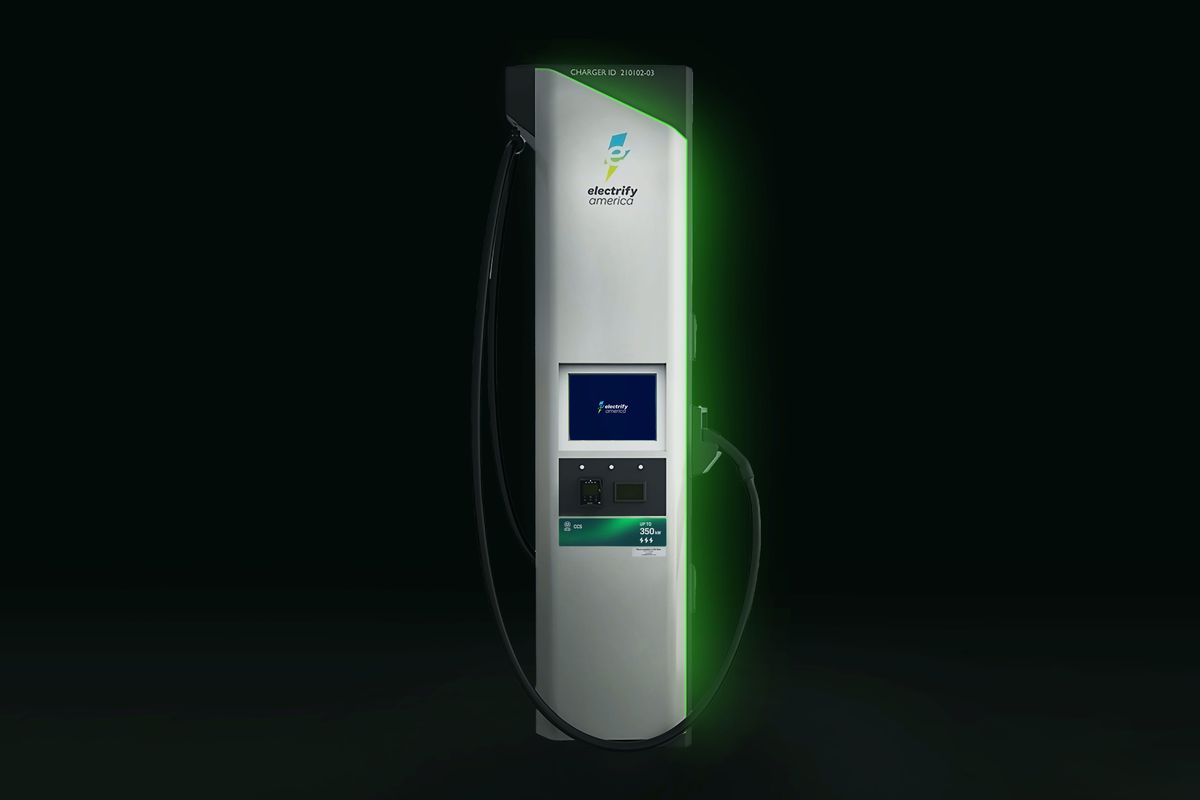 The most notable change for Electrify America’s current design is the inclusion of solar panel awnings, which have the dual effect of sheltering customers from the sun and inclement weather while also supplying power for the station’s operations. The company says it is currently in the process of adding solar awnings to 400-500 individual chargers at 100 charging stations across the country. It already has solar canopies at its flagship charging stations in Baker and Santa Clara, California.

Customer lounges at the redesigned charging stations will feature dedicated event spaces. On-site cameras and additional lighting will help provide a sense of security for those EV owners charging at night. And those stations built near shopping locations may offer valet charging and curbside delivery options, Electrify America says.

The company has also begun rolling out a redesigned EV charger with a slimmer profile and newly simplified controls. The ultra-fast chargers with up to 150 and 350 kilowatts of charging power stand at nearly 8 feet tall, with recessed screens to help reduce sunlight glare.

And lastly, Electrify America said it would be deploying on-site battery storage systems to 150 chargers across the country in an effort to help manage the energy load to the grid and capture excess solar energy where possible. “The momentum moving us closer to an electric transportation system is accelerating with consumers finding more and more choices of EVs from virtually every manufacturer,” Palazzo said.

The charging experience in the US is extremely fragmented, especially for people who don’t own a Tesla. While Tesla’s Supercharger network has been praised for its seamless user experience and fast charging ability, the opposite appears to be true for pretty much everyone else. There are approximately 41,000 public charging stations in the United States, with more than 100,000 outlets.

The Biden administration recently announced a five-year, $5 billion plan to shore up the nation’s patchy electric vehicle charging network, tapping into funds that were approved as part of the bipartisan infrastructure law signed last year.

Experts in urban policy and electrification have said that the money authorized for a nationwide network of EV chargers would have a measurable impact on Americans’ car-buying choices. A more dependable charging network will likely help juice EV sales in the US over the next decade.

Other companies are attempting to build more lounge-style EV chargers, but it’s been slow going. In 2018, Tesla filed a permit with the city of Santa Monica for a “Tesla restaurant and supercharger station,” possible in a nod to Elon Musk’s dream of building a 1950s-themed charging station, complete with rockabilly music and roller skates.