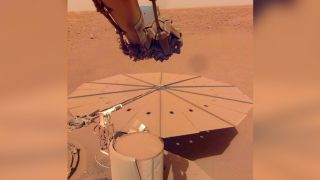 NASA's InSight Mars lander is seen covered in Martian dust in this image from April 24, 2022. The dust is starving the solar-powered probe. (Image credit: NASA/JPL-Caltech)

NASA's Marsquake-seeking lander is squeezing out as much science as possible amid dwindling power supplies, but it likely only has a few months left for its mission.

The Mars lander InSight is battling a long-term accumulation of dust on its solar panels and is down to one-tenth of its available landing power of 5,000 watt-hours, officials said in a press conference Tuesday (May 17).

"When we landed, it was about an hour — 40 minutes or so — where you can run [the equivalent of] an electric oven," Kathya Zamora Garcia, InSight deputy project manager at NASA's Jet Propulsion Laboratory, told reporters. Now, Garcia added, "we could probably run that approximately 10 minutes max."

But exactly when InSight closes off its instruments on Mars for good is a big unknown, as it depends on the weather, the spacecraft's performance and other factors difficult to quantify, JPL's principal investigator Bruce Banerdt told reporters.

"It's exceeded our expectations at just about every turn on Mars, and so it may actually last longer than that," Banerdt said.

These before-and-after images show NASA's InSight Mars lander just after its 2018 landing (left) and in May 2022, where dust on its solar arrays has cut its power levels to just one-tenth what they were at the mission's start. (Image credit: NASA/JPL-Caltech)

InSight touched down on the Red Planet in November 2018 and made unprecedented measurements concerning seismic activity on Mars, following less-than-successful attempts by spacecraft such as Viking. Just weeks ago, InSight's biggest-ever quake on Mars was reported amid 1,300 others it has sensed since coming to Elysium Planitia.

The mission allowed scientists to precisely place limits on the thickness of the crust and the size of the core, Banerdt said, which he characterized as a crowning achievement of the mission.

"We just had a really fuzzy picture of what was going on inside Mars [before], and I think InSight's real contribution is now we can actually draw a quantitatively precise picture of the inside," he said.

But like many other solar-powered craft on Mars, InSight's limiting factor was dust choking off sunlight, which is the main source of power for the mission. NASA has been warning for months that the InSight Mars lander would likely to fail by mid-year 2022, even after granting InSight an extension for its continued science value.

Due to weight and power concerns, the lander did not carry a supplemental system to clean off dust, such as motors or brushes. Engineers did manage to remove a bit from a solar panel in 2021 after drizzling sand on the lander and letting the wind blow it across the panel to clear some dust. But absent a great gust of wind from a nearby dust devil, InSight was left battling sandy accumulation.

To preserve power as best as possible, the mission will be tasked this spring to put its arm in a "retirement pose", in an inverted V-shaped position to take views of the seismometer once it is no longer commanded to move from Earth. The seismometer will run at least intermittently for a while longer, but it and other instruments should be turned off by late summer.

Banerdt emphasized, however, that the science team will remain busy for at least another six months on immediate mission tasks, even after InSight completes its data collection. "We're getting final data products, like our final Mars quake catalog and our final Mars models," he said.

The team will upload their last tranches of data to a publicly available archive (opens in new tab) that strives to have science information available within three months of collection, Banerdt said. This information will remain available essentially forever, adding to the catalog of retired space mission data that could be revisited for future investigations.

The archive will not only be useful for future Mars missions, but others that may be using seismic investigations or that assess interiors of rocky worlds. Banerdt, who said he has been working to get a seismometer on the Red Planet for most of his career, suggested Venus might be a natural next location (assuming said instrument could survive the intense heat).

Officials also cited the Dragonfly mission to Saturn's moon Titan as a beneficiary of InSight research, as the landing craft will carry a seismometer. That life-hunting mission should launch in 2027, if all goes to plan.

InSight exceeded its major mission goals despite facing issues with its "mole" heat-seeking probe, that was supposed to tunnel deep into the regolith to look at any heat trickling from the Martian interior.

In January 2021, NASA gave up numerous valiant attempts to get the German Aerospace Center (DLR)-built mole working, amid an extension review board warning that the mission was already running low on power. The problem came down to InSight encountering much sandier soil than found on the Red Planet before, which the mole wasn't designed to tackle (despite best efforts).

The mole ultimately only got a few inches beneath the surface, rather than the 10 feet (3 meters) its design called for, but Banerdt said the instrument was always seen as complementary (and not fully essential) to the mandate of Insight to assess Martian interior activity.

"Seismology tells us what the building blocks of the planet are today, and the [mole] was going to tell us something about the dynamics of it," Banerdt said. What was lost, he said, was being able to put some constraints on temperatures in the core, although some suggestions can come from the seismology.

Banerdt acknowledged that his next birthday, which coincides with InSight's mission selection date on Aug. 20, 2012, may be quite different in 2022 if the lander falls quiet by then. "This mission is really near and dear to my heart," he said.

Join our Space Forums to keep talking space on the latest missions, night sky and more! And if you have a news tip, correction or comment, let us know at: community@space.com.

Elizabeth Howell, Ph.D., is a contributing writer for Space.com (opens in new tab) since 2012. As a proud Trekkie and Canadian, she tackles topics like spaceflight, diversity, science fiction, astronomy and gaming to help others explore the universe. Elizabeth's on-site reporting includes two human spaceflight launches from Kazakhstan, and embedded reporting from a simulated Mars mission in Utah. She holds a Ph.D. and M.Sc (opens in new tab) . in Space Studies from the University of North Dakota, and a Bachelor of Journalism from Canada's Carleton University. Her latest book, NASA Leadership Moments, is co-written with astronaut Dave Williams. Elizabeth first got interested in space after watching the movie Apollo 13 in 1996, and still wants to be an astronaut someday.