Until recently, agreement on any climate legislation seemed far-fetched. 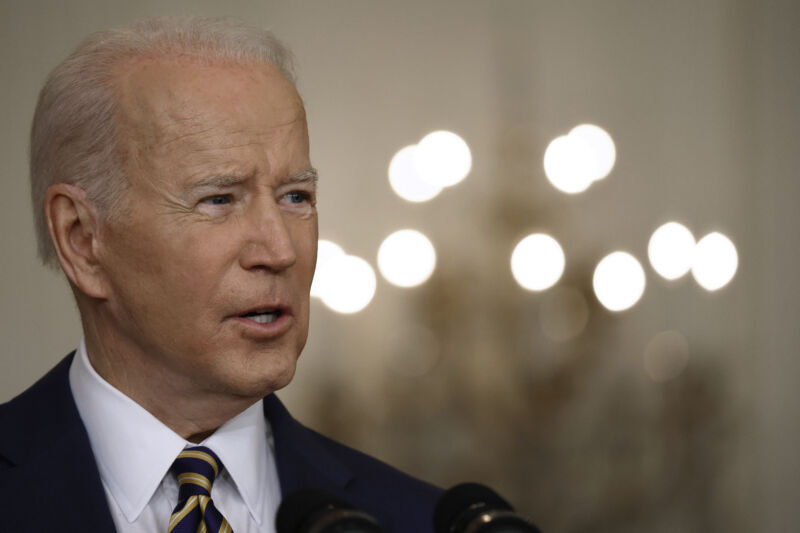 Enlarge / President Joe Biden talks to reporters during a news conference in the East Room of the White House on January 19, 2022, in Washington, DC.

President Joe Biden yesterday expressed support for breaking up the Build Back Better Act, saying that the parts intended to combat climate change appear to have the most support.

“I think we can break the package up, get as much as we can now, and come back and fight for the rest later,” Biden said at a press conference. “I’m confident we can get pieces—big chunks—of the Build Back Better law signed into law.”

The initial Build Back Better bill contained provisions for universal preschool, paid family leave, and free community college in addition to clean energy tax credits and other climate-related measures. That bill, which weighed in at $3.5 trillion, was met with skepticism by some moderate Democrats and was pared down to $1.75 trillion after jettisoning free community college and 12-week paid family leave.

Two senators in particular, Sen. Joe Manchin (D-W.V.) and Sen. Kyrsten Sinema (D- Ariz.), were opposed to those and other measures, citing concerns about inflation. While Manchin supports many of the climate portions of the bill, he has reportedly balked at others, like a fee for methane emissions.

Biden’s current focus is on passing $555 billion worth of tax credits and financial incentives to address climate change. The bulk of it, around $320 billion, would go to providing tax credits for installing residential and commercial solar power, retrofitting buildings to be more energy-efficient, and purchasing electric vehicles. It would also provide funds to jump-start domestic manufacturing of clean energy equipment, including wind turbines and solar panels, and about $1 billion for EV charging stations.

“We need to move to pass a package now that has 50 votes,” Sen. Edward J. Markey (D-Mass.) told Axios. “The climate, justice, and clean-energy provisions in Build Back Better have been largely worked through and financed, so let’s start there and add any of the other important provisions to support working families that can meet the 50-vote threshold.”

The Biden administration thinks that the smaller, climate-focused bill could trim a gigaton of greenhouse gas emissions by 2030 and put the country on course to meet its Paris Agreement pledges of reducing emissions 50–52 percent below 2005 levels.

Just a few years ago, the idea of climate being a point of agreement seemed far-fetched. Yet, as the climate has continued to change and negotiations over the bill have dragged on, old sentiments that were once taken for granted are now being reconsidered. Various interest groups—particularly the United Mine Workers of America—have dug into the bill to see what it contains, and rather than attempting to blockade the transition, have come out in favor of it.

Manchin has long been viewed as an impediment to congressional action on climate change, though his stance has apparently softened. But the prolonged haggling over the larger Build Back Better bill seems to have hardened some of his other positions, which is why the White House is going to be taking a different tack as they attempt to reopen negotiations.

“One lesson we learned in the first year is, I think, the less we talk about our negotiations with specific senators and congressmen, the better we are,” White House Chief of Staff Ron Klain told The Wall Street Journal, “so I’m going to say our talks with Sen. Manchin will proceed directly and privately.”